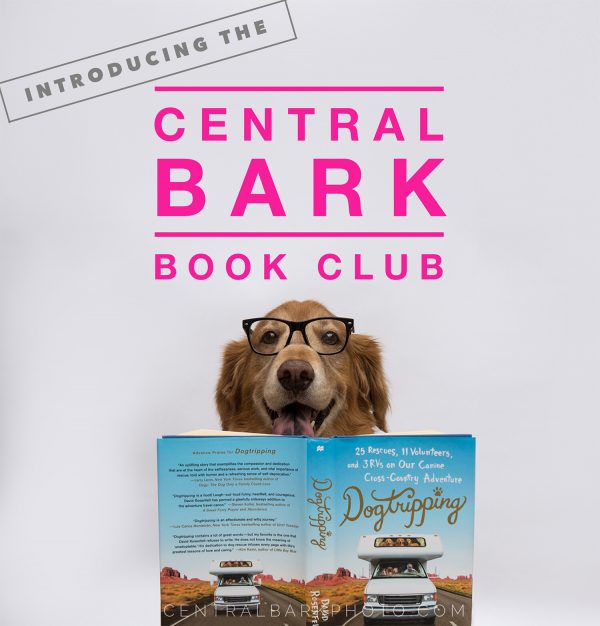 Hey pet-loving fans! How many of you enjoy reading books that feature dogs or other animals in the main story? I love these light-hearted reads, especially when I am in need of some quiet downtime. I don’t watch much television so I often find myself searching online for books recommended by other animal lovers. I’ve come across several great books that way, which includes the most recent book I read, Dogtripping by David Rosenfelt. And because I really enjoy these types of books, I thought it would be fun to start the Central Bark Book Club! I’ll share some of the books that I’ve read that I think you all might enjoy, and I’d love to hear of good books you’ve read as well! So let’s jump into my first book recommendation!

When single, non-pet owner David Rosenfelt met Debbie Myers, the dog mom of a golden retriever, he had no idea just how much she would change and furfill his life. (See what I did there?) In this true story of their 2011 cross-country move from Southern California to Maine, David comically tells the story of how they were able to comfortably move their 25 rescue dogs with the help of 9 volunteers via 3 rented RVs. 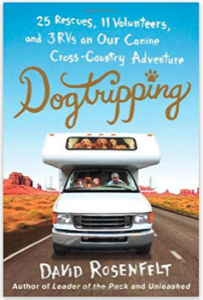 How it all began…. When Debbie introduced David to her golden retriever Tara, he quickly became fond of her, expressing that Tara had to be the best dog in the history of the world. When Tara passed a year later, Debbie and David promised her that they would help other dogs in need, creating The Tara Foundation in her honor. They became passionate about rescuing dogs, most specifically golden retrievers, from the overcrowded and underfunded animal shelter system in and around Los Angeles. Over the years, they rescued and fostered over 4,000 dogs, finding most of them loving homes and keeping the rest to join their pack. At times, they had 30+ dogs in their care, mostly hard-to-place, large, senior dogs who could enjoy their twilight years in a loving home.

But as retirement approached, David and Debbie purchased a home near Damariscotta, Maine. Their move would be anything but typical since they needed to figure out how to move 25 dogs coast-to-coast. Once David had considered every plane, train, and automobile option, he finally found a solution! He came across an RV company who permitted dogs on board and as a bonus, the RVs could be picked up in Southern California and returned on the East Coast. He was able to recruit 9 other passionate dog rescue volunteers, who collectively, took turns at the wheel and managed timely bathroom, meal, and rest breaks in order to make it across the country in 5 days.

Woven into the story of their cross-country adventure, David shares tales of some of the many dogs they have rescued over the years. The stories pull at your heartstrings, with tales that will make you both laugh aloud and shed tears. Because David and Debbie spent so much time volunteering and being a part of the animal shelter system, he also pulled back the curtain on some of the day-to-day activities. A few of the stories really broke my heart. But he is being real, sharing how some dogs end up in shelters through no fault of their own. Some dogs started their lives in homes, only to be discarded to a shelter later in life because someone found it to no longer be a cute little puppy or too old to be a running partner. But David keeps most of the story upbeat, humorous and heartwarming.

I admire and applaud David and Debbie. With their passion and promise to Tara, they helped save thousands of dog’s lives. It is an amazing feat to house, feed, take to the vet, keep track of medications, groom and clean up after SO many dogs, yet give each one individual attention so they know they are loved. It takes great organization and a huge heart to care for so many dogs. I thoroughly enjoyed this book and recommend it to dog lovers and those involved in animal rescue.

Have you read this book? If so, which dog’s tale did you enjoy the most? What book would you recommend I read next? Leave a comment below and let me know. 🙂

—–> Also, if you are looking to add a new pet to your family, please, please, PLEASE consider adopting a pet from your local rescue or animal shelter. There are thousands of wonderful and amazing pets available on Petfinder.com, where we found two of our adorable, entertaining, loving, funny, and loyal furry family members. I could not imagine life without them – oh how standard it would be. There are so many great pets in need of a loving, forever home.* This post contains an affiliate link.
Previous Post
Red, White & Blue Frozen Dog Treats Recipe
Next Post
Freddy’s Dog Birthday Party!